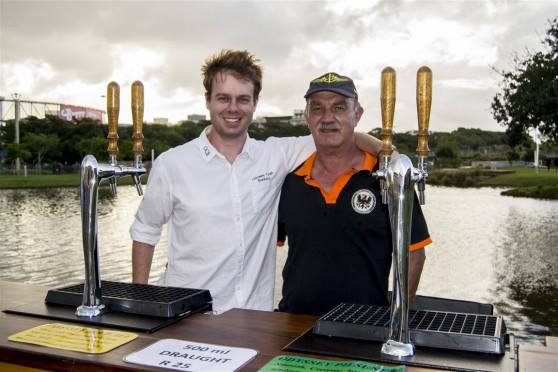 Odyssey started out as most good things do, as a hobby. After studying accounting at Rhodes University Ashton realised that working in a dreary office was never to be his destiny. While casually sipping a beer one evening, the show Brew Masters came on. An idea was born. Why not try brewing beer? So Ashton and Raymond set out to build a brew system at home. It was a small, 60 litre system and initially it was just good fun to brew beer! But the more we brewed, the more we loved it. This lead to the thought of opening a Craft Brewery here in Durban North. Odyssey Craft Brewery was officially launched at SA on Tap 2013. Things have progressed since then with the odd set back due to red tape issues, but now we are steaming ahead! Due to us being in quite small premises, we decided to settle on a 500 litre brew system which currently gives us a capacity of 1500-2000 litres a month depending on what styles of beer are being brewed.

Ashton: Ashton is the Brewmaster here at OCB. He is responsible for new recipe development, monitoring fermentation and is the guy in charge during brewdays. Ashton studied at the World Brewing Academy in Chicago and also helped to put together the “Beer School” courses. His favourite beer at the brewery is the Chocolate Coffee Porter.

Raymond: CEO, technical wizard and the brewmasters assistant. Ray drives the brewery forward and is responsible for the day to day running of things. Being very technically minded and hands on, Ray was key to putting the entire brewery together, from the brew system to the fermentation tanks to the cooling unit! Far from being just a technical guy, he lends a very helpful hand during the brewday and is a vital cog in the works. His favourite beer is the Pale Ale.